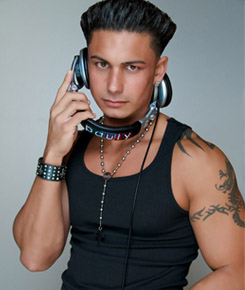 Everything You Need To Know About Pauly D

Pauly D has taken both clubs and reality television by storm. DJ Pauly D, or Paul DelVecchio, is one of the original cast members on MTV’s infamous reality show, Jersey Shore. Unlike some reality show contestants who seemingly have to fight through auditions to gain a casting role, Pauly D has claimed that his role was handed to him quite easily. The Jersey Shore member is actually a Rhode Island native. Here producers of the show filmed a day in his life and were convinced that Pauly D would be a great addition to the cast. DJ Pauly D helped increase the popularity of Jersey Shore. The 32-year-old reality star is also the only member of the cast to secure his own spin-off. The Pauly D Project premiered in March 2012 on MTV, and it showcases DelVecchio’s life as a disc-jockey. Pauly D is known for his trendy looks, but his reality stardom also helped his advance his career as a DJ. Unlike other cast members who gained fame for their crazy antics, Pauly D is innocently known as a fun-loving person. His DJ status continues to blossom alongside his reality show career—it seems that the two go hand-in-hand for this celebrity.

Pauly D and His Lamborghini

Pauly D And His Cadillac Escalade