Everything You Need To Know About Amber Heard

Like many Hollywood hopefuls, Amber Heard had humble beginnings. Born and raised in Austin Texas, Amber grew up in a Catholic household and subsequently attended St. Michael’s Catholic Academy during high school. However, her world was turned upside down when she declared atheism after her best friend was killed in a car accident. She dropped out of school and headed out to New York City, and eventually Los Angeles.
Up until dropping out of school, Amber flirted with a few acting opportunities. She was in her school’s drama club and she had roles in Austin television commercials. She hoped to find a modeling career in New York City, but instead moved to Hollywood to pursue acting.
Her big break came in 2004, where she played a role in Friday Night Lights. Subsequently, she landed roles in All the Boys Love Mandy Lane, The Rum Diary, Zombieland, and The Joneses. Amber is a versatile actress, starring in both comedies and dramas. She is even set to star in Robert Rodriguez’s Machete Kills, which is due out in 2013.
While Amber sets the stage for acting, she has also gained quite a bit of media attention. In 2010, Heard came out at a Gay & Lesbian Alliance Against Defamation (GLAAD) event in which she also announced her relationship with Tasya van Ree. She is also known in Hollywood as a tough girl, owning a 1968 Ford Mustang as well as a .357 Magnum gun. 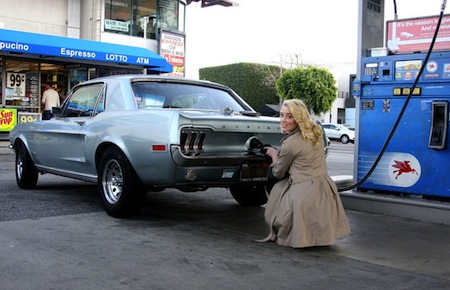