Marshawn Lynch may go down in history as one of the most money conscious players to ever play in the NFL. His entire career he didn’t spend a penny of the money he made from playing, instead he just lived off of money from his Beast Mode clothing line and sponsorships. Watch the video to find out what he likes to cruise around! 🙂

Justin Bieber showed off his dirt bike wheelie skills with this photo he posted on Instagram last week. 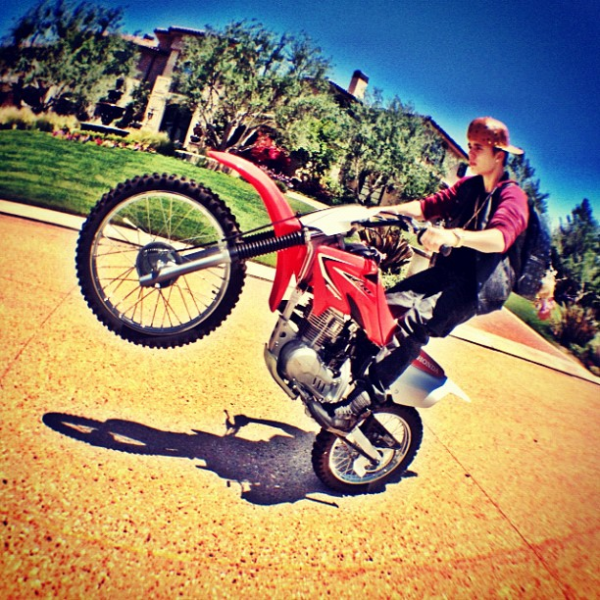 Honda just launched “Matthew’s Day Off”, an extended version of their upcoming Super Bowl ad featuring Matthew Broderick. In the 2:20 mini-movie Matthew reprises his famous role from the 1986 Ferris Bueller’s Day Off by calling in sick to his movie shoot so he can run around in his all-new 2012 CR-V.

Honda says there are more than two dozen references to the movie throughout the commercial including the flower delivery guy (0:57) as a reference to a famous scene in the 1986 movie. Unfortunately we couldn’t spot the sweet 1961 Ferrari GT California or Jennifer Grey. Can you spot the other references?

Our favorite Canadians were caught rolling deep in a Honda Accord while going out after Vidcon! Yo Harley, saving gas is SMART, but where’s the Jack!

Muscles Glasses is no where to be seen, wtf!

**If you don’t get that joke then check out a couple episodes of Epic Meal Time at Youtube!

Unlike Kathy Griffin who slightly ascended from being a D-lister by owning a Maserati, Andy Dick seems to be liking his bottom-of-the-brink status by choosing to ride shotgun in a Honda CRV AND getting into a bar fight. Nothing like a D-list car for a D-lister I guess.