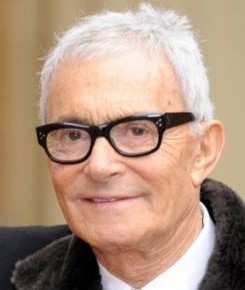 Everything You Need To Know About Vidal Sassoon

You may recognize the name on some of your favorite hair products. Such items are used to make you look and feel good, and that was the lifelong mission of the man behind the name: Vidal Sassoon. This British native had a penchant for creating unique hairstyles, and in later years his company made it possible for millions of people to get the desired hair care right at home. While the man behind the brand is gone, his legacy still continues.
Vidal Sassoon was born in England. Growing up in poverty and during World War II, the future businessman took up in interest in hairstyling during his early adulthood. In the 1960s, he created the famous short pixie cut style that Mia Farrow wore in Roman Polanski’s Rosemary’s Baby film. Not only did Vidal have an eye for fashion, but he was also known for creating hair styles that worked for busy people in a modern era. In the 70s his business launched Vidal Sassoon brand of shampoos and conditioners, which still remain prominent today.
His company was sold a few times, more recently to Regis. Vidal was diagnosed with leukemia and died from the cancer in 2012. Aside from his knack for creating unique hairstyles, Vidal Sassoon had a passion for philanthropy.