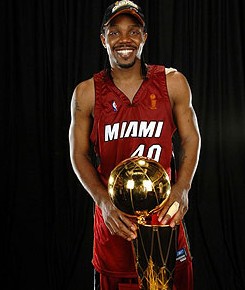 Everything You Need To Know About Udonis Haslem

Many pro-basketball stories are the same. You play good in high school, get a scholarship to college, and then hopefully get drafted into the NBA. While Udonis Haslem certainly did well in both high school and collegiate basketball, his story is unique in that he is one of the most successful NBA players that wasn’t drafted into any franchise. He has swept the court with numerous records and continues to be a valuable asset to his team, the Miami Heat.
Udonis is a south Florida native. He went to high school in Miami, where he helped his team win a title in 1998. Unfortunately, due to questions about Udonis’s residency at the time, the Florida High School Athletic Association stripped the school of the title. Still, these events did not deter the talented basketball player from obtaining a scholarship to the University of Florida. He played at the university for four seasons and helped them compete in an NCAA championship title game during every one of them.
After his success as a Gator, Udonis took a year off and played with a basketball team in France. He came back to the States as a free agent and eventually signed with the Miami Heat in 2003. Since then, he has become one of the most valuable team members in franchise history.