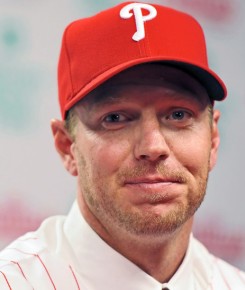 Everything You Need To Know About Roy Halladay

The Philadelphia Phillies have their “Doc” on hand, and fans are also grateful to have him. Formally known as Roy Halladay, Doc got this nickname from an announcer who named him after the infamous Doc Holliday of the Wild West. The nickname was formed during Roy’s lengthy career with the Toronto Blue Jays. He has played as Starting Pitcher with the Phillies since 2010, and he continues to have an impressive record within all of Major League Baseball.
Roy was born in raised in the Denver, Colorado area. He fell in love with baseball at a young age and started following into the pitching direction when he was 14 years old. Roy was also lucky enough to receive formal training from Bus Campbell, who was a well-known baseball trainer and guru from Colorado.
The Doc began a promising career with the Toronto Blue Jays in 1998. He was one of the first round picks of that draft year. By the time he was traded to the Phillies, Roy was already known as one of the best MLB pitchers of the decade. When he isn’t playing baseball, the Doc calls Florida his home, along with his wife and two children.