Amber Heard is a “self confessed lover of muscle cars” and her classic 1968 Ford Mustang proves it. Amber’s husband, Johnny Depp made her believe the beloved 1968 Mustang had been stolen for the third time on an upcoming episode of Overhaulin’ and Amber fell for every second. She was furious. So furious she actually flipped off the cop. But don’t worry, she’s pretty happy with the outcome! What do you think of the new look?

Here’s Amber with the car before: 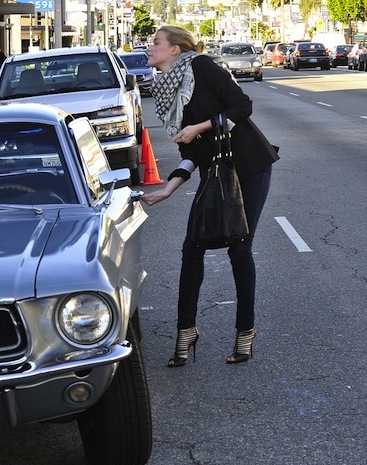 If there’s one celebrity we could see driving around in a 1959 Corvette it would definitely be this guy.

Johnny Depp recently received a very generous gift from producer Graham King for his hard work in the upcoming film The Rum Diary.

Oh, and the film also stars Amber Heard so if that isn’t enough to go see the movie we don’t know what is…

Check out a preview of the film to see Depp and Heard in the corvette.

Thanks to CorvetteBlogger for the tip!

Johnny Depp is rarely ever caught by the cameras but just yesterday he was spotted picking up his kids from school in a Cadillac Escalade.

Depp wasn’t driving the Escalade himself but then again why would he when he can just hire a driver. Anyone know what Johnny has in his own garage?