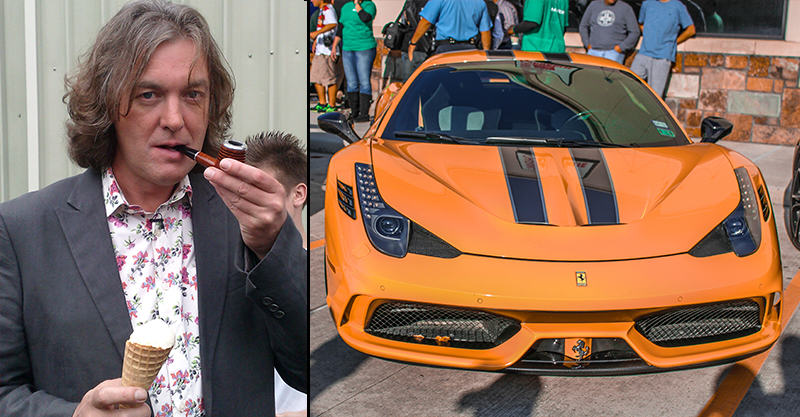 Despite being caught up in the media whirlwind surrounding fellow Top Gear presenter Jeremy Clarkson’s fist, James May has ordered a Ferrari 458 Speciale. It’s not every day you order a car from one of the globe’s finest automotive Marques after your future is in the air regarding income, but we all know the Italian manufacturer gives May the “fizz”, a feeling he attributes to special cars.

Although his house requires a new roof, he managed to successfully put his argument across to his better half he affectionately calls, “Woman”.

May has previously owned a F430 and a 458 Italia, but instead of opting for the upcoming 488 GTB, he decided on an orange (yes, orange!) 458 Speciale. The fact it’s the last 458 off the production line before the 488 GTB begins its run makes it a very special car indeed.

Top Gear fans will no doubt know of May’s affections for the Dacia Sandero, and one aspect of the 458 Speciale he noticed was the fact its racing stripe cost almost exactly the same price as the little Romanian car.  Before options the Speciale is a remarkable £208,090, but the TV presenter hopes he’ll make it back in the future.

I’m sure Captain Slow, Jezza, and Hamster will appear on TV together some time in the future – when that will be, who knows – but when they do, it won’t take long for the ‘orange’ jokes to start regarding May’s latest edition.