Remember when Rowan Atkinson crashed his McLaren F1 into a tree last year — it wasn’t pretty — actually it was pretty scary looking. Fortunately, Atkinson was able to walk away from the crash with only a relatively minor injury but his McLaren was mangled to the point where we thought for sure it wouldn’t be fixed. Turns out it wasn’t a complete write off after all. McLaren’s Special Operations division decided the F1 was actually a repair job with an estimated cost of £910,000 (1.4 million dollars). The insurance company paid out to fix it and officially make it the most expensive insurance payout ever recorded in Britain.

So what did Atkinson do once the car was fixed — drive it of course. He wasted no time at all getting back into the drivers seat. Lets just hope he steers clear of the trees this time! 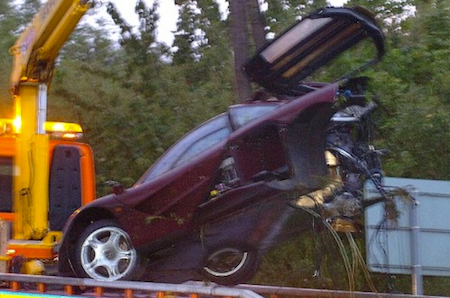 Shout out to Blade_27 and Erik for the tip.